Drag Race Down Under Season 2 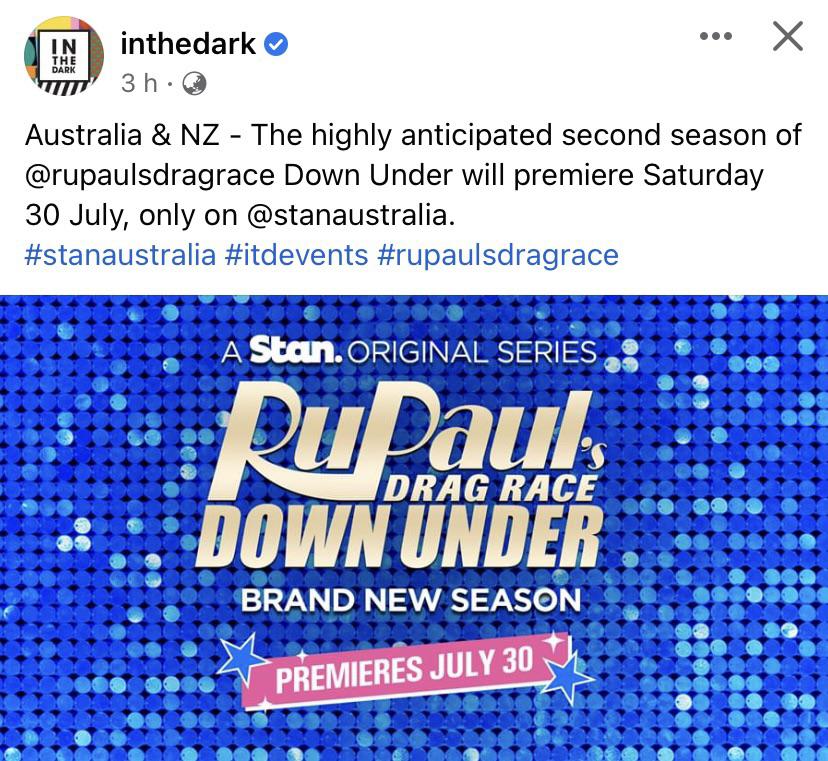 Is Ru hosting it again? The quality of the queens wasn't really the issue last time as much as what an obvious rush job it was. It might be better if they just handed it to a local. (Ideally Courtney but that ship has probably sailed)

Yeah it's Ru and Michelle with that fun ginger twink again

The twink was fun

There aren’t usually this many foreign drag races concurrent are there? This, France and Canada? And when is Philippines?

Okay well that's a shock but I'm pleased - S1 had loads of good moments in the chaos, it certainly wasn't the worst ever snatch game either, and if it was, at least that's been surpassed comfortably now

It was of course, a total shambles in other ways. Bringing back Art with no need for an explanation

And the Scarlet horror (who probably would have won otherwise).

The biggest crime was getting rid of Anita who was BY FAR the most interesting and fun queen. She wasn't even bottom 2 that week for me, and I didn't think she lost the lip sync either. I actually ended up assuming she did something cancel-worthy in the past and they quickly binned her rather than make a show of it a la Scarlet, but hopefully it was just shitty decision making

Anyway this is great. Ginger gay was a brilliant judge and everything feels like unfinished business. Plus another free holiday for Ru and Michelle so that's nice

I wonder how many of the queens will turn out to be massive racists this time around. Let's hope there's better screening in place

I'm up for this return though. Season 1 was a mess, but a fair bit of that felt down to the pandemic (all the would-be guest judges having their contributions limited to 5 second video messages, and the like).

Do we know if BBC Three / iPlayer will be showing it? When I say I'm up for watching, I don't mean enough to shell out for 'Wow Presents Plus'. The same goes for Canada season 3.

I'm quite disappointed they haven't gone full troll mode and just given the hosting job to Art Simone. No introduction or explanation needed.

Or just give Dame Edna one last hurrah.

My first reaction was "there's only been one?" However, I'm down for this mess returning, but they cannot get rid of a fan fave so early again.

Ginger twink I liked on the show, not so much on however many minutes I lasted into his Netflix show.

I hope they have a lisp so it can come across as absolutely awful (and in the spirit of the series!)

why does it look so cheap

also season 1 filter is back. It looks amateurish.

How many non-kiwis are there?

If ever there was a sign that this season was also cursed. They should lock it up with season 1 and DRUKvsTW in a lead-lined box and drop it in the ocean

I was optimistic that they’d get this season right after the disaster of season 1 but it looks like could more of the same, the sound editing is AWFUL! It’s so distracting.

Apparently at least one of them has already been forced to apologise for past racist comments and cultural appropriation too. What a country!

Another fairly white season, isn’t it?

Here for a mess so I'm rather excited so far.

Those voiceovers were definitely recorded on their phones

Episode 1 is on iPlayer as of today. I actually thought it seems like a good cast and a step up on season 1, plus better than the current Canadian bunch (high praise indeed!).

I am so bewildered by the editing on this. It only served to make it seem even MORE like Ru wasn't actually there at all

Did anyone else think boy Spankie Jackzon looks just like our Buttertart?

No but I was wondering how she could be five years younger than me?

Watching now. A total step up from the Matalan rack drag of Canada

And for the I'm really here joke they should have got the camera man with a hairy back to be filmed from behind getting slapped.

Oh they're all here? Well, no standouts and 2 are goodlooking out of drag. I liked the cut to of the spotty New Zealander when the bloody one came on, with the spots now looking like splattered blood.

I'll take all 3 of the pit crew please. God that middle one looks so dumb

That has a shot at being the worst opening photoshoot challenge ever.

Spankie is younger than me, but looks old enough to be my dad. Honest..

Kween Kong is gawwwjus. They walked in strong.

Molly does give me Timmy Ginny Mallet Lemon vibes.

On first impression, Faux Fur has potential and is certainly likeable if a little too keen to Laganja the house down.

Ru serving some Ms. Mandarin. I was hoping for some Shannel lip nonsense when he got to the end of the runway walk.

Beverly Kills. Why haven't we used this pun during the Moopyrate years? Cute out of the drag, but not 1 of my 2 picks.

Boy Aubrey is the spit of boy Ivy Winters.

I'd say Kween Kong pulled that out the bag.

Faux seems to have won this surely.

Poor Pomara serving Sherry Pie.
You must log in or register to reply here.