I know different productions are handling filming things differently at the moment and all that, but the absolute LACK of any piped-in applause at the end

They should have binned that dreary lot and allowed the Irish Kelly Llorenna to belt out a HITZ MEDLEY.

Raining On Me said:
I actually DO wish them well after years of misery so I hope she qualifies. Unless she doesn't deserve it
Click to expand...

Dark Carnival said:
Im still not ready to say anything positive about Ireland

Who were they, Monsters Inc?
I’m guessing that they are the past and future winners of Ireland (who aren’t busy)?

it might have been better to do an Irish winner medley, at least that hasn’t been done to death like the deep cuts they chose!

Anyway she’ll ruin it all by grimacing and looking frightening in the semi and yes I give you SAME HEART as a comparison point
Last edited: Mar 2, 2021

I keep coming back to this and have decided that it has a lot of heart and low-key I want this to qualify above almost all the others. It’s not my favourite, but Lesley Roy seems like such a nice person committed to the Eurovision experience that I’d be gutted for her in a way akin to Anna Bergendahl if she doesn’t get to the main stage. And my initial prediction that she doesn’t may well be wrong because this seems like the only song of its type?

Yeah, I want her to qualify even for non-patriotic reasons. The fact that she's got the Heroes/Dandi dansa/Every Minute staging team bodes well too...

Her overly breathy vocal continues to bother me but once you get past the fact that she's GASPING FOR AIR* after every other word, it's a pretty good song.


*Maybe Sam TEEN told her "Still Breathing" is all that matters.

An undeniably striking, unique, queer performance in the end, it must be said

Yes, can we go back to this? What happened here? it was SHOCKING.

Yes I bet she wished she got that rag-tag bunch of Irish woofters back now.

The staging was just an over thought MESS. Iconic for all the wrong reasons.

To be fair to her the camera broke just before her performance, which is what caused the delay and won't have helped her nerves.

Sadly she hadn't had a great track record with live vocals for this song EVER.

I don't think the performance concept was the issue so much as the fact she just couldn't sing it full stop!

Why was the staging so DARK? It was reminiscent of:

The concept was MESSY. Just one of those screens would have been enough. And NOT the gynaecologist shot.

How can you possibly say the performance concept wasn't the issue?

The entire performance would have been DOOMED whoever sung it, because of the concept - it was an over-thought, unclear MESS that just didn't translate. Never mind the BIG REVEAL which felt more like the aftermath of a Blue Peter craft session than a grand look behind the magicians curtain.

I do applaud Ireland for ambition and for TRYING though, it's just unfortunate that this particular concept was a bust.

I have the same issue with Leslie as I have with James Newman. She's just not an engaging performer, and there's absolutely nothing you can do about that. No stage concept would have possibly saved her. Never mind that she isn't the greatest singer either. She should never have been selected in the first place.

Perhaps some toned -down elements of the performance, with a youthful male performer who could sing and work a stage might have possibly worked, but there was just so much wrong here I could write a thesis on it. Who was meant to even vote for this aside from Irish diaspora?

wurst said:
How can you possibly say the performance concept wasn't the issue?

I have the same issue with Leslie as I have with James Newman. She's just not an engaging performer, and there's absolutely nothing you can do about that. No stage concept would have possibly saved her.
Click to expand...

The same way you managed?

I mean the fact she COULDN'T SING IT is really the very first thing you'd probably look to considering it was memorable staging!

I'd have much rather she'd just stood there strumming a guitar and donned an Avril Lavigne skinny tie, straight hair and eye makeup. The staging was ambitious and while quite enjoyable I don't understand why it was all WHITE AND GREY.

Эулия said:
Anyway she’ll ruin it all by grimacing and looking frightening in the semi and yes I give you SAME HEART as a comparison point
Click to expand...

I mean the fact she COULDN'T SING IT is really the very first thing you'd probably look to considering it was memorable staging!
Click to expand...

The staging would have sunk literally anybody. You could have stuck Eleni Foureira in the gynaecologist chair and she'd still have flopped out trying to hit all those camera marks and navigate the CREPE PAPER TWIZZLERS.

If I'd pick out an issue with the staging - I'd say I didn't really understand what it was all for. What was the point of it all supposed to be? What was her journey? Goes through all of it and then....it stops being scrapbooky and she runs across the catwalk? Why?

What cheap staging, and she sounds like a 40 a day smoker with asthma. I take it she didn’t qualify??

at this Irish Times headline which does NOT HOLD BACK!

I don’t think the concept was an issue, my group of friends all thought 'oh honey, you did a lovely job with your scrapbook but those... NOX!’

I can't believe she wrote herself a song that she couldn't deliver.

THAT SAID, I do applaud the ambition. A swing and a miss is better than playing it safe (and also missing)

Yea I didn’t enjoy it on ANY LEVEL but I am glad it EXISTS.

dUb said:
THAT SAID, I do applaud the ambition. A swing and a miss is better than playing it safe (and also missing)
Click to expand... 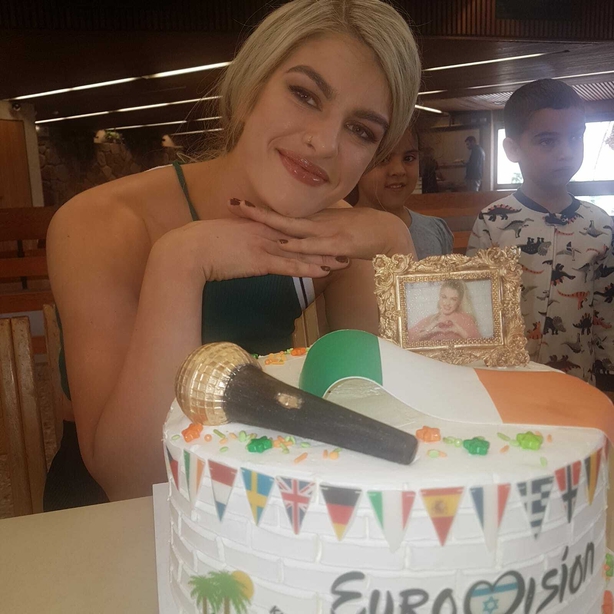 Oh you know SOMEONE will nominate this in 2045 for Ag’s HOT EUROVISION 100!

@Ag the ORIGINAL PICTURE IS GONE DID YOU SAVE IT

But yes, I'm glad it exists. It's certainly an oddity I will be privately returning to for all the wrong reasons

wurst said:
The staging would have sunk literally anybody.
Click to expand...

Musical Theatre Graduate Vasil would have coped I'm sure. It's the kind of staging that would have been much more suited to stage performers rather than singer/songwriters

wurst said:
It's certainly an oddity I will be privately returning to for all the wrong reasons

I don't know why, but it cracks me up when she's stumbling into the next frame at 1.10, it's like she's in a Scooby-Doo episode