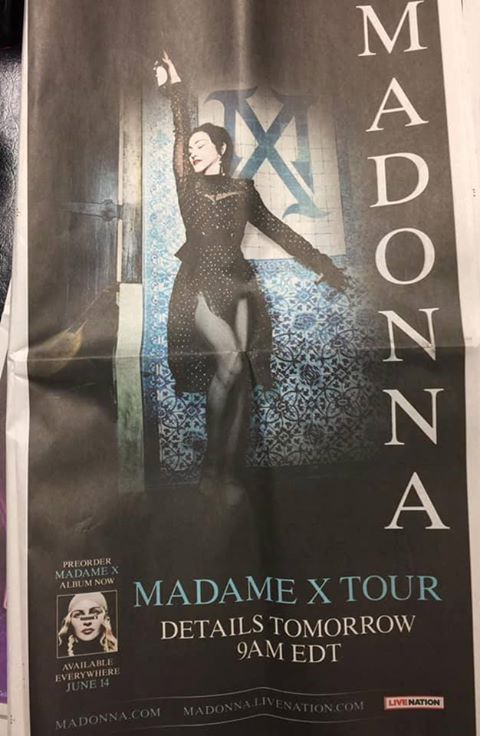 No word on venues yet but I would say almost certainly arenas, not stadiums

I wouldn’t mind going to see her in a more intimate venue. That is never going to happen is it?

1.8k is pretty intimate. But she's not going to play venues like that here.

And even if she did, the chance of getting a ticket would be miniscule.

If she's doing the US in September/October then maybe Europe is later in the winter which gives me more time to save up / pay off the credit card for the tickets!

She will do London’s intimately

Ready for the Madonna ticket nightmare to begin!

Do we have dates and venues?

Rita said:
Do we have dates and venues?
Click to expand...

Not yet. Announcement expected in the next few hours. As @Dr Lecter posted, looks like London Palladium is strongly rumoured.

I think this announcement today is just for the states

Following her incredibly stunning performance at the Billboard Music Awards and the announcement of her highly anticipated new album Madame X available globally on June 14, Madonna, Live Nation and Maverick have announced a series of rare and intimate performances to take place exclusively in theaters, giving fans an opportunity to see Madonna in an environment like they never have before.

The Madame X Tour will kick off September 12th at the BAM Howard Gilman Opera House in New York and will feature multiple nights of shows in each city including performances at the Chicago Theatre, The Wiltern in Los Angeles, the Colosseum at Caesars Palace in Las Vegas, the Boch Center Wang Theatre in Boston, The Met Philadelphia and at the Fillmore Miami Beach at the Jackie Gleason Theatre in 2019. The Madame X Tour will then resume in early 2020 with performances at the Coliseum in Lisbon, the Palladium in London and at the Grand Rex in Paris.

Influenced creatively by living in Lisbon, Portugal over the past several years, Madame X is a collection of 15 new songs that celebrate Madonna’s career-long affair with Latin music and culture as well as other global influences.

Madonna’s long-time promoter Arthur Fogel, President - Global Touring and Chairman - Global Music, Live Nation said: “The chance for fans to see Madonna at these venues is incredibly special. We are proud and excited to be able to deliver this ultimate opportunity for her fans.”
Last edited: May 6, 2019

Only playing Lisbon, London and Paris?!

Guess I won't be seeing her this time then

Oh I’m sure they’ll add more cities. They’re going for the slow rollout approach with the entire campaign. I’m sure there are more shows pencilled in which will be announced later “due to phenomenal demand”...

This is actually quite FUN

Whoever her new face chap is she needs to keep him .

She looks astonishingly good in that video.

I’m so stressed about tickets for this !

Suedey said:
I’m so stressed about tickets for this !
Click to expand...

In sure it will be fine .

WHY DIPLO? HE CAN FUCK OFF

I thought her speech sounded a tad slurred in that video but I like the idea of what she’s planning.

Her speech always sounds a bit SLURRED. I presumed it was the silly GRILLZ she insists on wearing.

Or maybe that mini-stroke she's rumoured to have had

Sheena said:
Her speech always sounds a bit SLURRED. I presumed it was the silly GRILLZ she insists on wearing.

Or maybe that mini-stroke she's rumoured to have had
Click to expand...

Where did this stroke rumour come from ? Suedehead?

Dr Lecter said:
Where did this stroke rumour come from ? Suedehead?

now that we've knocked the idea she has a stroke-induced lazy eye on the head, are we moving onto the slurred speech theory?

Her face looks great, it's settled really nicely. She looks better than during the Hard Candy promo.

She does look better than she has for a good few years.

Still, SORT THAT BLOODY HAIR OUT, WILL YOU?

I actually prefer this hair

Realistically I just don't think I'm going to be happy until she has Something To Remember hair again.

What are the prices here then?

Ellie said:
What are the prices here then?
Click to expand...

Is it going to be a random ballot like America? I’d rather that than a bunfight to get tickets

Sheena said:
Is it going to be a random ballot like America? I’d rather that than a bunfight to get tickets
Click to expand...

Pretty much you register and then get a text on Sunday with a code if successful and then can get the tickets on the Friday they go on sale . That’s for general .

And a GROUP photo at that!

Dr Lecter said:
What a vip package *artist will not be anywhere near you but you get a photo of the stage*
Click to expand...

That was just making me laugh- that’s amazing and typical her. WHAT A ROTTEN OLD HAG!

I also liked “Post show party with cash bar” - NOT EVEN A FREE RIBENA!
You must log in or register to reply here.