What difficulty did you play it in? I wheezed through it on Normal (2nd Climax) but then I had played the first one a lot. Then I tried 3rd Climax and I got my arse handed back to me even on the first level. Button mashing won't even get you to the first boss in 3rd Climax. And I think there's a Very Hard / 4th Climax difficulty level waiting to be unlocked...

Bless U and all that jazz

Peekaboo said:
What difficulty did you play it in? I wheezed through it on Normal (2nd Climax) but then I had played the first one a lot. Then I tried 3rd Climax and I got my arse handed back to me even on the first level. Button mashing won't even get you to the first boss in 3rd Climax. And I think there's a Very Hard / 4th Climax difficulty level waiting to be unlocked...
Click to expand...

It doesn't have it

Well there's the Labo VR, which is a headset you make out of cardboard and stick your Switch into: 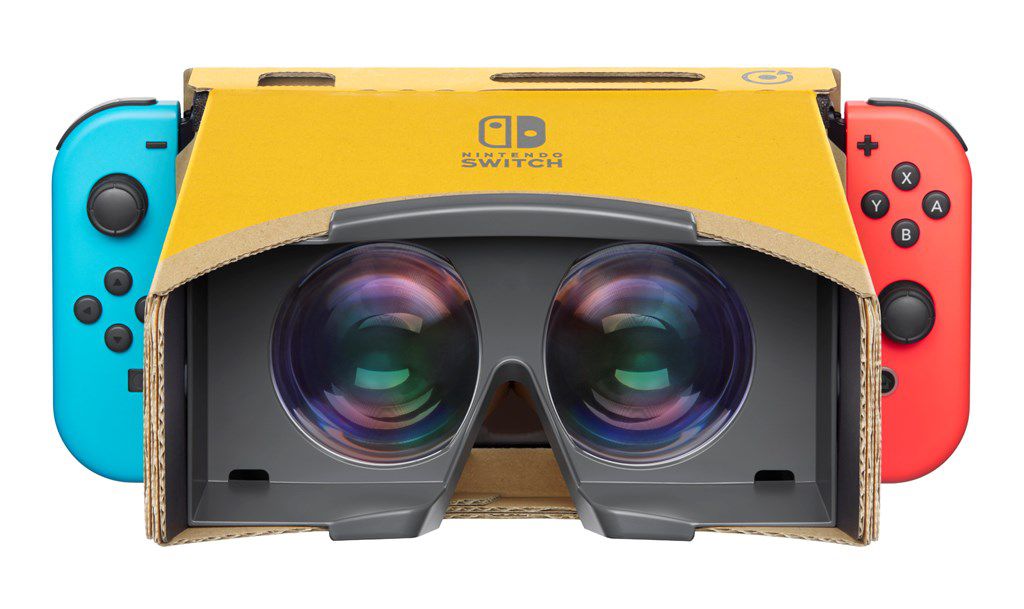 I don't think there are many games for it though! For proper VR you need a decent PC and something like an Oculus, I think.

You can also do PlayStation VR (which I have) on the PS4 or PS5. It's good, but you're restricted to games only - on PC you can do lots of other stuff with VR (like the seedy chat stuff our @Cloud so enjoys for example

WHO KNEW THAT @Cloud WAS SUCH A DIGITAL SEX PEST?!

Other uses for VR include slaying dragons, wielding lightsabers and bopping to Caramella Girls, so it isn't ALL sordid.

VR for me has been the true game-changer of this generation of consoles. It may not be here to stay, but playing the first level of Astro Bot Rescue Mission was GLORIOUS in the way Mario 64 felt for the first time for me.

Also the PSVR kit may be a bit dear but the games themselves are all going for a tenner or less and there's HEAPS of good stuff.

IS IT TRUE I CAN DOWNLOAD GAMES ON THE SWITCH AND DON’T NEED TO BUY GAMES CARTRIDGES?

Oculus Quest 2 is a standalone platform and very cheap.

It can also be used for PC VR.

If it has a bit of critical mass in terms of titles, I could be swung on getting one.

Xenoblades Chronicles. YES OR NO?

It's reduced to 39€, so I'm tempted. Never played the Original.

Yes, by all reports.

The second, not so much. It is good, but has gatcha mechanics and a slightly porn-y character design... which verges on the ew side of things.

I couldn't get into it, it was too much for me - it felt like there were progression systems from about three or four different JRPGs all crammed into one.

I much prefer X, but I'm also tempted to buy this at the discount. I'm rather annoyed that I recently opted for the vouchers and this is the far better deal.

I still laugh at this character design:

What a fucking DISGRACE

She won't be laughing when the inevitable back problems set in.

I loved Xenoblade Chronicles on the Wii, it's obviously not impressive now but the combination of open landscapes and fast, instant combat was a delight back then. The utterly bonkers English dub too, no shame.

The plot was a whole lotta bollocks but it kept you going in a shonen kind of way. But the combat was where it was at.

Oh yeah, I should probably clarify that I've only played Xenoblade 2 - I don't know if the first has the same battle system?

Peekaboo said:
The utterly bonkers English dub too, no shame.
Click to expand...

Jenna Coleman no less. She came back to do extra for the remaster too.

So what are the big Christmas releases for the Switch? Are there any?

I think Mario Kart Home Circuit was it

I’d just like a proper Nintendo Direct. Was there was one this year outside of Mario 35th Anniversary?

It’s like COVID happened and they just thought “ugh 2020, whatever” even though Sony and Microsoft managed to release brand new consoles.

Circuit is not it. It's this year's labo, except they were approached by an external team who pitched the idea. Sales figures will be interesting - in Japan it's still under 100k copies pre-holiday weeks.

Holiday game is Hyrule Warriors: Age of Calamity, more by default what with the likely Covid-caused scheduling reshuffle. The game doesn't interest me. I could always replay the demo to see if I pick up the controls beyond button bashing better, but I dislike a Zelda game being so frantic.

It's a shame 3D World + Bowser wasn't ready. Now that I would pick up.

Had Doom Eternal launched physically and not just digitally (the 8th?) that could have been something to push if the port is up to the standard of the first one, but it never would have been up to par sales-wise with Nintendo's traditional 1st and 2and party holiday games even if it was an exclusive.

I guess that means it's left to evergreens, but it's also worth noting that Capcom have said Monster Hunter Rise had considerable development delay because of Corona. Maybe that was the planned holiday game.

Corona clearly has had an effect but this is not an uncommon pattern for anyone who has ever owned a Nintendo console.

Once they've burnt through their usual franchises they announce a BIG game for the console's twilight years but expect you to get by with their catalogue and any ever-dwindling third party contributions. Luckily there are DOZENS of fantastic indie games on the Switch this time around but if you're after new AAAs I wouldn't expect much more than BOTW2 and usually another Kirby game.

New Metroid is still to come and that Lylat Wars racing game.

I think it's more of it being a gaming genre I don't really appreciate than it being a bad game, but I'm really disappointed by Age of Calamity as well.

Also, they really need to recast the voice of Zelda. The one they've been using is completely insufferable.

much like Bayonetta 3. And what Lylat Wars racing game??! Have I missed this?

VoR said:
I think it's more of it being a gaming genre I don't really appreciate than it being a bad game, but I'm really disappointed by Age of Calamity as well.

Also, they really need to recast the voice of Zelda. The one they've been using is completely insufferable.
Click to expand...

Those 'musou' games are all fur coat and no knickers, every single one of them. They're the mindlessly repetitive equivalent of Candy Crush for the more hardcore crowd, I can envisage many disappointed faces on Christmas Day for many kids who have discovered Zelda with BOTW and think this is a sequel of sorts.

I really liked the Dynasty Warriors series growing up but yes, it's very much a 'played one, played them all' situation.

Good mindless fun though, and who doesn't enjoy slaughtering hordes of burly, faceless soldiers as a glamorous lady armed only with a FLUTE?

I'm not quite seeing the same bleak forecast as peekaboo

(but I get it). 2021 is shaping up to be rather software heavy - I'm personally expecting things to start chugging along the next again year when the Switch 2 whispers properly crank up a notch surely. I wonder if we'll see stop-gap things like a N64 Mini in 2023 when there's one more year to go, etc.

I don't expect the 3D Metroid anytime soon (2D on the other hand...)

The Starfox racing game was intentionally planted to help Nintendo and Retro discover who was leaking their stuff, I believe - pretty sure it's not a real thing (I would love a new proper Starfox game though).

Oh that Percy has been told this already

COB said:
The Starfox racing game was intentionally planted to help Nintendo and Retro discover who was leaking their stuff, I believe - pretty sure it's not a real thing (I would love a new proper Starfox game though).
Click to expand...

Well I found this, but it seems to link to a tweet that's been deleted

A racing game would fit with their general MISMANAGEMENT of the franchise, but I'm choosing to believe it's fake.

I wonder if Retro have just been silently working on a 3rd DKC game and it's simply on the shelf as they don't need it right now. Otherwise, surely they've had at least 1 if not 2 projects canned.

Scribblenauts Showdown is a fun game!

I bought the remake of Toki in the sale for about a quid. NOT WORTH IT

MARIOKART is amazing! Even better than it was on the Wii U.

I love the BATTLE mode, although I am little confused on the FLYTRAP POLICE battle. How do I open the cell?
You must log in or register to reply here.